June has come and gone. It’s been raining here some, these past weeks. There’ve been quite a few tears, too. At some level, it all makes sense. It is the rainy season in Oaxaca, after all. As the one-year anniversary of our due date approaches, it’s no surprise that deep emotions are stirring. I knew that this summer would be hard, but I did not expect the trouble to begin so soon.

It’s Cancer season, one of the most foreign astrological signs for me. Since Rafa’s due date was originally July 18th, I imagined he would be born under the crab’s sign. I found this curious since I sometimes struggle to relate to the introverted, homebody Cancers in my life. What would it be like to have a water-son? With all my fire and earth, how would that feel?

I am convinced that Rafa was a boy of the waters. When the midwife put the Doppler on my belly during the second trimester he would wiggle and “swim” away from the prodding. When I found out when I was due, I felt so much relief that my pregnancy would end during the rainy time: cool, green Oaxaca would hold me lovingly through labor, delivery and the post-partum weeks.

Yet the rains did not come last year. Not in May, not in June and then July 18th… July 20th… July 21st came and went without a single storm. Rafael did not come either. Before we knew it, Cancer’s soft inward-turned waters gave way to Leo’s fire. And still… no rain.

I felt it in my body first: something wrong. The long, hot, dry hours agitated me, worried me. And this was just the beginning of our woes with water in those complicated days before we knew that Rafa had chosen another path. The morning of the first contractions there was no drinking water. We bought some. Then there was the water that came out of me on Rafa’s second due date. Of course I thought it might be the fuente breaking, but it was so little. I went to my midwife and she said my amniotic fluid felt fine (though we’ll never really know, it may have been a lack of water in my uterus that led to Rafa’s death). But that day, we heard his heartbeat. The last time.

The next day we thought for sure he was coming. We awoke to find our cistern empty and had to order a water truck to fill up the tanks. Yeyo and I had a terrible fight (as I shared in The Days of Hell). And still… it did not rain. The final days of July and not a single drop.

On July 30th when we could not find Rafa’s heartbeat, two things happened: first, I saw a hummingbird in the trees outside my midwife’s office and second, it started to rain. I remember the water coming down on the car as we made our way to my doctor’s office and the ultrasound machine that I already knew would not find a heartbeat. It rained all afternoon. It rained the next night after he came out of me and was cremated. For the rest of the month, the rain soothed me every time it fell.

This year, it’s not raining every day like it used to. But every time the sky opens, I feel the relief that the water brought after I found  out that Rafa had died. The cyclical nature not only of the seasons but also of other occurrences that happen around this time of year have me in a nostalgic way. The city has a tendency to withhold water from the people during these weeks and so our cistern has run dry more than once in the past weeks. The pump broke again. All of these things trigger Yeyo and I in different ways. Sometimes I find myself in the ‘woulda / coulda /shoulda’ mode that I thought I’d left far behind. I wonder: if we had not gotten into that fight, would Rafael be here now? I know it doesn’t matter, but I still wonder.

When I learned that the Archangel Rafael is the protector of the waters and that he is often pictured with fish, I made a decision to become a protector of waters. I’m not yet clear on how that will manifest in my life, but I know it will. The waters of oceans and rivers and springs have soothed me since Rafa’s death. Many people have listened to me talk about the significance of the waters in my story. Here’s just a little of of what they have offered back:

“Don’t let the ugly face of blame overtake you. You did nothing wrong. It is not your fault, It is not anyone else’s fault… With that, don’t be hard on yourself if that is a salty wave that needs to wash over you right now. I see you made it to the ocean. I’m glad you were able to make it. I hope you were able to feel and receive the healing you needed from that mighty body of water.”
– Sarah Sue

“The days move in time and water’s flow: rivers, lakes and oceans full of change. On the night of July 29 I had a dream; it was about watching for whales… when whales arrive in our dreams I know the sacred arrives as they bring a spiritual connection to/for us. I want to share this dream with you both as a knowing that the sacred and spiritual has arrived as the whales have and is in this flow of grief and loss you both float in now.”
– Siggy

“This land buries babies near the river
Close to the water in cool soil
Where the rich black earth holds them,
enfolds them
To grow in the spirit world
Being blessing
Sweet baby spirit
And we walk with slow, heavy steps
On the shards of our dreams”
– Jackie

My friend Kailea had this beautiful blue garment made for me by artist, Wai’ala Ahn. It’s full of prayers and love and an invitation to fluidity: 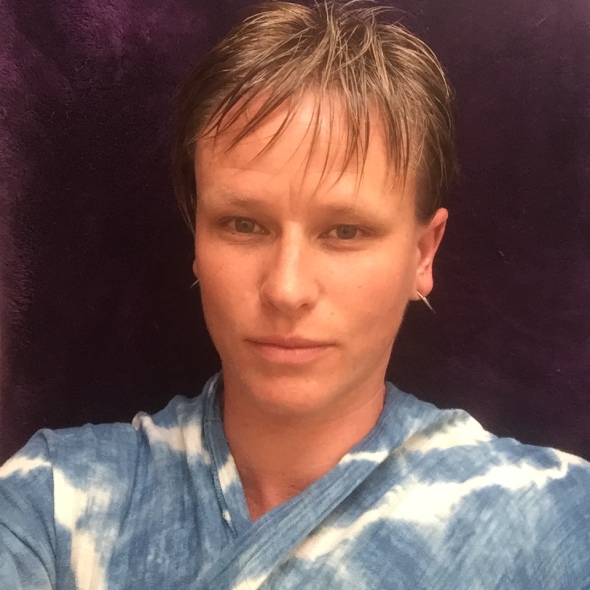 Here we are: coming up on this deeply difficult anniversary. I’m so present to my losses. And again, the magnanimity and adaptability of water is serving me. A week ago, I listened to a webinar about our post-partum stories with Molly Caro May. I admit that at first I felt self-righteousness: here are all these women complaining about their post-partum periods when their babies all are alive! I know, mala onda, right? Yet, that’s a real thing: I have experienced a lot of negative feelings towards pregnant women and babies in this year.

The next day, however, I started to realize that for the past while I’ve been letting my victim story really solidify. When someone I hadn’t seen for a while said they were sorry about Rafa’s death, I’d launch into the litany of other terrible things that have happened to me since then. I realized I was doing this because, in a way, my victim story became my shield. I didn’t have to let in the empathy and care of this other person because I could deflect their tenderness with my tragedies.

With this, I’m seeing how the fluid, adaptive nature of water can serve me when it comes to understanding my story, what has happened to me and my family this past year. Our stories are never just one thing; they are always changing, just like water. Yes, terrible things have happened. And wonderful things and deep, transformative things. Falling prey to the solidity of the single story, no matter which one, only limits me in my capacity as a feeling, learning, growing being. Even though I vowed to be a water protector, I’m finding that the water is actually protecting me… as well as cleansing me, refreshing me and healing me.

During the spring, I received a couple of emails encouraging me to stop blogging and turn inward or, at least, to avoid processing grief here. It set me off on quite a tailspin. But I really considered these suggestions. I’ve decided that writing here allows me to continue flowing with my multiple stories and with the grief and emotions that come and go in ebbs and flows. AND I’m conscious that I would like to be writing more for myself and not worry so much about the obligation to post. On the other hand, I also want to call in more tributaries to this river of writing. In the coming second cycle of this space, I will explicitly invite others to share their stories of grief and gratitude here, particularly those related to stillbirth and miscarriage.

It’s just too hard for me to stay quiet. When I don’t write, things become all bottled up, dense and confusing. It is not always easy and sometimes it’s incredible painful. I’m learning to flow with things and trying to remember (when I can) that this too shall pass. I think I’ll stop now and go outside. It just started to rain.

I’ll leave you with a beautiful poem by nayyirah waheed.

you do not have to be a fire
for
every mountain blocking you.
you could be a water
and
soft river your way to freedom
too.