Before we get to Rafa and his story, I need to tell you about Ruby Beltrán Dunford. Unlike our son, Ruby did not come to exist on this material plane, she was not conceived or nurtured or born. Ruby was the baby girl that Yeyo and I dreamt of for some nine years before the nurse practitioners and OBGYNs and clinicians told me that I could never have children. She was the baby that never was.

In the early fall of 2007 I decided that I was ready to have a baby (to raise on my own). I thought Yeyo would make a great dad (you know: smart genes, good looks, sensitive soul and loads of generosity and kindness). But he wasn’t the sperm doner-ing type, I guess. He said, “I’ll have a kid with you, but only if you’re my partner and we try to build a life together.” And I said… “Well, why not?” We decided I would move to Mexico the following year and I headed out from Boston on a freezing cold morning in January with three suitcases and never returned to live in the gabacho.*

Yeyo and I didn’t actively start ruminating about Ruby until 2011. My maternal grandmother’s name is Ruby Bigler Manson. Though I didn’t always have the greatest relationship with Grandmother Ruby, I wanted to reweave my connection to my maternal lineage and I liked the name. And so did Yeyo. Baby Ruby was beautiful and perfect in our imaginations over the years.

We didn’t take any action to find out why I wasn’t getting pregnant until 2013; and I didn’t really start investigating things al fondo until 2016. Yeyo always said he had no doubt at all that she would come along when the time was right. But she never came. I did a lot of work in therapeutic processes and movement and journaling and journeying to try to understand on a psychological or energetic level, what was keeping me from getting pregnant. The messages I received were that I was creating infertility internally. Then came the blocked fallopian tube bomb!

There were some options for interventions but we had made the decision to only go so far in terms of fertility treatments (and that wasn’t far at all). When we got the tube news, we accepted that we were not going to be parents (at least not in the biological sense) and life continued on. Sometimes, it seemed like Yeyo was much more upset about my infertility than I was. He asked me why it didn’t impact me emotionally in the same way. He even shared that he felt badly for feeling so sad about it. After all, he already had a son. I learned then that we just grieve differently. For me, letting go of this dream was like the slow disintegration of a sand castle on a quiet beach being coaxed back into the sea by gentle, lapping waves. I think that for Yeyo it was more like getting a couple of tons of sandbags dropped on his head. 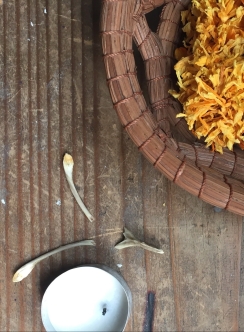 In October 2016, my mom (Mitzi) and Yeyo and I did a beautiful letting go ceremony in the Court of the Patriarchs in Zion National Park to bid farewell to this dream. Our tears soaked into the redrock before a monolithic cube-shaped rock that seemed to have been dropped from the heavens. We buried our yet-to-be created memories of Ruby and left a forked stick at the edge of the rock as a kind of rustic headstone. Mitzi brought a wishbone to the ceremony. To me, the bone was like a talisman, as if to say, “If you can’t have this wish you’ve always wanted: what will you wish for now?” Yeyo and I pulled on the two prongs of the wishbone at the end of our ceremony in Zion and in broke into 3 parts. The little tab at the end flew into the air and disappeared into the sand.

When I left Utah a few weeks later, my mom handed me a tiny brown gift box and told me to open it when I got home. I arrived in Oaxaca a few days before Día de los Muertos. I slid off the lid of the box to find a wishbone and a note inside. We cried many tears as we built the altar for our dead. We made a very special place for Ruby on that altar. I stood before the sacred shrine, weeping and wondering: how can I grieve for that which I never had?

A year passed. It was a hard one for Yeyo and I. The hardest we’ve ever had. We were in a long process of deliberating whether or not to stay married and of uncovering the next expression of our relationship. One year after the tube news, we met together as part of that process in deep, meaningful ceremony in the Sierra Sur of Oaxaca. It was during that voyage to discover our new WE that I was able to actually grieve for Ruby. I remember pulsing on the floor, pushing myself forward and backward on my hands and knees before the chimenea… crying, moaning, and imploring an answer from the universe: “Why? Why? Whhhyyyy didn’t it happen?” I’ve never experienced such sadness and release at the same time. Raw, unbridled, unashamed sorrow. It was really the first time that I actually felt the pain of not being able to bring a baby into this world.

Fully feeling the whole gamut of human emotion is such a crucial part of this process of conceiving, gestating, mourning, grieving, healing and creating beauty. And this is how Ruby Beltrán Dunford, the baby that never was, paved the way for Rafa’s conception… just a few weeks later.

* The United States of America